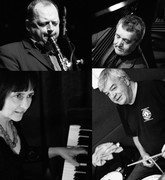 ALAN BARNES has won the prestigious BBC Jazz Instrumentalist of the Year Award on several occasions, has produced over 40 CDs on his own Woodville label and frequently comperes major Jazz Festivals. He recently featured on the Bryan Ferry “Jazz Age” recording, and on the Great Gatsby film soundtrack. He has extremely busy freelance and teaching schedules, while leading ensembles from Duos to Big Bands.

KATE WILLIAMS is a recipient of the John Dankworth Award For Talent Deserving Wider Recognition, she has gained a distinctive reputation as both a writer and performer.
“Williams has a quality rare among jazz composers: a musical vocabulary that’s all her own”
The Observer

DAVE GREEN had established himself as a major figure by the end of the 60s having worked with musicians as diverse as Stan Tracey and Humphrey Lyttelton. He also played and recorded with many front-rank visiting Americans who counted themselves fortunate in having his solidity and flair behind them. Throughout the 80s and into the following decades, Green remained at the forefront of British jazz, working with Peter King, Didier Lockwood, Spike Robinson and a host of other British and visiting jazzmen. A superb timekeeper and exceptional soloist, Green is the essence of the international jazz musician.

STU BUTTERFIELD has been a well established and highly regarded drummer on the UK scene since the late sixties. Throughout the past ten years, he has been back with a vengeance performing in a variety of groups and as a regular at Jazz at Karamel!

Earlybird tickets available for £8 at www.karamel.london and £10 on the door.