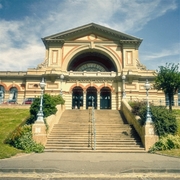 Ally Pally's former chairman of the Board of Charity Trustees will face a standards hearing over the ruinous 8 - month Firoka occupation of the Palace which was somehow allowed to happen, despite the 125-year lease to the company being challenged and found unlawful in the High Court.
Basically the company squatted in the Palace, at the charity's and counciltaxpayer's expense (employees were being paid by the council/trustee) - taking the profits of the exhibition business but paying little or nothing back. Estimates of the cost to the charity vary but run into millions of pounds.
Subsequent reports commissioned by the Council - Walklate 1 and Walklate 2 - found that a "Licence" to occupy had apparently been bulldozed through, without being seen or authorized by the board of trustees or their solicitor. It turned out to have been signed not by the council or any of the trustees but by the General Manager and the trading company's company secretary. Yet the trading company itself only had a licence and had not power to assign the building.
SAP supporter Clive Carter investigated this fiasco and made an official complaint against the former chair of the trustees which is the subject of the hearing. Following that, further action could follow, as clearly what happened involved a huge breach of trust.
Clive writes:
Haringey Council Standards Committee will be convening a hearing on 30 March at the Civic Centre after an investigation lasting nearly 12 months, following my complaint against a Member while acting as a Trustee on the Alexandra Palace Trust Board (as Chair). The Complaint follows two council investigations ("the Walklate Reports") into the 'development' of the Licence-to-Firoka.
Firoka were given premature permission to run Alexandra Palace and were eventually evicted by the council, well after the High Court quashed the Charity Commission's Order, and therefore, stalled the 125 year Lease.
During the Firoka occupation, under the Licence, not only did all our charity's trading profits go to Firoka, but on top and as a financial inducement to the property developer, the council contributed a huge subsidy to the private company by way of seconded staff and a long list expenses – all met by Haringey taxpayers.
Losses to our charity as a result of the Licence were calculated in the "Walklate 2" investigation to amount to between £1.5m and £2m.
The Hearing is likely to be open to the public but a decision will be taken about that on the morning of the first day. The report ("Walklate 3") by independent investigator, Martin Walklate, is likely to be made public.
The "Hearing into Complaint SC002/0910:" before Haringey Council's Standards Committee will be at the Civic Centre, Wood Green High Road – probably committee rooms 1& 2, at 10:00am on 30th & 31st March 2011.
Link: http://www.minutes.haringey.gov.uk/ieListDocuments.aspx?MId=4990
Summary of the actions and issues which will be examined:
• Key officer advice against licence (briefing note to chairman), withheld from other Trustees
• Promotion of premature licence to property developer (Firoka, i.e. Firoz Kassam);
• Premature occupation of Charity premises;
• Huge public subsidy to a private company;
• High Court ruling of 5 October 2007, quashing sale;
• Firoka later evicted by council in early 2008;
• Loss to our Charitable Trust estimated at £1.5m to £2m;
• Conflicts of interest galore

Comment by Adrian Essex on March 31, 2011 at 9:27
There has been an extraordinary spectacle at the Standards hearing into whether the former chair of the Ally Pally board of trustees, Cllr Charles Adje, breached the councilllors' standards code during the time in 2007 when Haringey councilors attempted to flog off the Palace to ex-slum landlord Firok Kassam.

Cllr Adje was accused of concealing from his fellow-trustees a briefing note from former General Manager Keith Holder which admitted that there was no need to give even more sweeteners and financial inducements to Kassam's company, Firoka, to lock them into the deal in May 2007. Holder turned up at the hearing yesterday and maintained that he had previously colluded in the suppression of this information out of loyalty to the political group he had served for 15 years in Haringey, and to Adje himself. Adje himself took the stand and was questioned by one of the council's solicitors, and was pressed to explain why he had not disclosed the note to his fellow trustees, with the result that Haringey taxpayers suffered over two million pounds loss of income from the Palace exhibition business - which went straight into Firoka's coffers.

Cllr Adje is representing himself and he questioned Holder at length, launching vitriolic attacks on him and his competence as an officer.

To be fair to Adje, much of the loss occured after he had resigned in early 2007, when it was clear that the deal to flog off the Palace was going to be legally challenged. The trustees had already allowed Firoka to occupy the building and they did not even bother to find out what SAP was able to - that the company were effectively squatting and paying no rent, causing the huge losses. With huge arrogance, they could not contemplate that their plans could unravel. Only when Jacob O'Callaghan wrote to the chief executive of Haringey in Novemeber - a month after the JR - did they start to think about evicting Firoka - which took two months to accomplish.


SAP supporter Clive Carter is to be congratulated in persisting with this complaint, forcing the unedifying spectacle played out in Haringey Civic Centre yesterday when two of the key players wriggled to justify their actions, in the full glare of the public gaze. But in truth, Holder and Adje were just carrying out a disgraceful and ruinous political policy which had been pursued for many years by the council to flog off a building that did not belong to them. All of the trustees, and in fact the council itself, should have resinged, or been removed, by the charity commission, but this is now such a compromised and useless regulator under its chair Dame Suzi Leather that it will do nothing even after these latest revelations.
The hearing continues this morning at 10 am and the panel is expected to make a finding today

Comment by Adrian Essex on April 1, 2011 at 6:51
Today, the Member was found to have breached the councillor code by bringing the council into disrepute.
The penalty was 4 (four) months Full Suspension
Amongst many other things the councillor said, one of the most quotable was at the end:
"I was too trustworthy"
He meant trusting, but in the circumstances, what he actually said had a certain irony.
No one can be too trustworthy and Cllr. Adje was not worthy enough of our Charitable Trust.
Here is a link to the whole file on the case (480 pages) but be aware that it would be a 38 megabyte download.